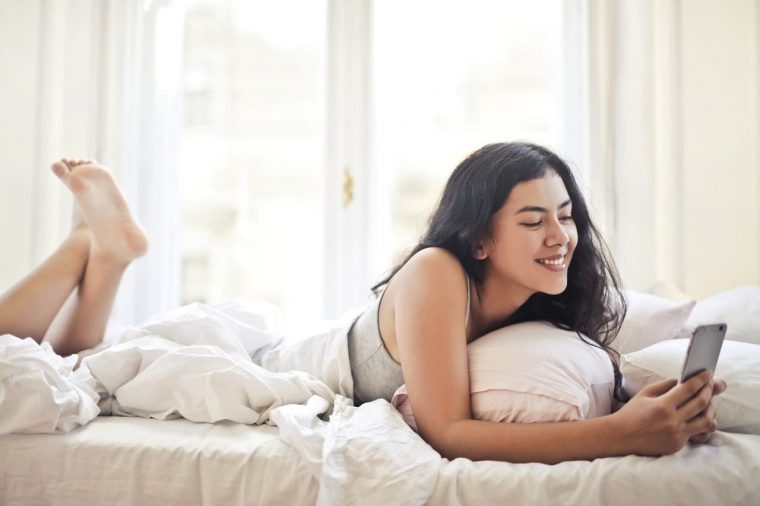 Texting Tricks to Get an Aquarius Man to Chase You (Again)

You’ve been enjoying sexy, passionate text communication with your Aquarius hunk—but suddenly, things have gone cold. You’re left feeling a little confused and perhaps insecure. These texting tricks will help you turn things around and make him chase you again!

Men often say women are confusing, but we know our guys can be just as mystifying—and that’s perhaps the most true when it comes to the elusive Aquarius man!

He might be there one day and gone the next. It takes as special kind of woman to stand strong and secure and not allow his contradictions ruffle her feathers!

The reason for this is that Aquarius is a sign ruled in modern Astrology by the planet Uranus. Uranus is the planet of contradictions, strangeness, uniqueness, and freedom. Ultimately, the Aquarius man wants to be your best friend and wants his freedom at the same time. Confusing? Yep!

Usually, Aquarians are naturally geared for texting and any sort of social media. Your Aquarius man may even prefer to conduct much of your communication via text message rather than face to face, so it is rather strange when he suddenly stops chasing you or communicating with you.

It’s also difficult because most Aquarius guys are not particularly warm, either. Ruled by the element of air, he’s actually quite cool and distant, and often very detached.

But at the end of the day, this is a man who is wholeheartedly committed and faithful—he just needs a woman who is able to stand back and give him space.

Of course, you want him to chase you, too. You don’t want to feel left out in the cold. Before I help you with some ideas for texts to send to your Aquarius man, let’s first explore why he’s not chasing you right now.

Why Does an Aquarius Man Stop Chasing?

With most guys, when they want you, they really want you—and while Aquarius men may not be exactly fiery and passionate all the time, they are stubborn and persistent as anything.

So why has he stopped chasing you?

The truth is, you’ll probably never know for sure. These men are such a mass of conflicting ideas and behaviors that you may simply give up trying to figure them out! But in my experience as a relationship astrologer, these are the top five possibilities that make an Aquarius man stop chasing you.

Now that he has you, he may feel he can just go back to his life with his many interests and passions, which are probably largely intellectual in nature.

He’s gotten comfy, so he feels like he can sit back and chill out—and he probably won’t know how you feel until you let him know.

How do you do that? Just communicate. He appreciates a good conversation.

2. He’s Focused on His Friends

Aquarius is the friendship sign, and you’re probably his best friend. But he still has a lot of other people who he wants to share his ideas and experiences with, which can make it feel like he’s just not chasing you anymore.

He may just need a little reminder that while you respect his buddies and his friendly nature, you also need his time and attention—and not just as a friend!

Aquarius men can be rather detached. Chasing is not something natural for them. They have this way of being intensely fascinated with you one moment and seemingly not interested the next.

The Aquarius man is infuriatingly unavailable sometimes. If you really want a man to chase you all the time, try a fire sign on for size—because these air signs are too “cool” for that.

Dealing with air sign detachment is never easy, but you do get a best friend, someone whose intelligence is on your level, and someone who will always have your back when the going gets tough.

You just have to ask yourself, how important is it for you to be chased?

This is a man who is very self-sufficient, ladies! He’s not going to run after you or beg for attention. And honestly, he will appreciate it if you are the same way.

He needs that space and independence in his life, and when he has this, he has the space and room to bring you in, too.

This isn’t easy for many women to accept, but at the same time, this is an opportunity for you to develop that same kind of self-reliance.

One of the reasons why an Aquarius man can stop chasing you is that he is feeling stifled. This is especially common if you are a water sign, for example—sensitive, attached, and needing close connection.

Even if you’re not a water sign, you probably have the desire to connect more than he does, which he may perceive as clingy or needy.

It’s not a “you” problem, it’s him—but his reaction may be to disconnect, feeling suffocated or claustrophobic. Until you get to know him, that is—then you may find he’s a big softie underneath it all!

Now let’s get down to business and get your Aquarius man to chase you with the same passion as before—or at least acknowledge your messages!

I’ve listed six texting tips that should get him interested again. Take these themes and modify them according to your particular Aquarius guy. After all, these men are unique and unpredictable, and one size doesn’t always fit all.

This is a very important theme when it comes to texting. Aquarius men are air signs, as I said, and they love to play it cool themselves, so when you match that energy, they may sit up and take notice!

Playing it cool means leaning back a little—as in not being the girl that chases too hard. You could say something like:

“Hey. I thought I’d check in and see how you’re doing. Hope it’s all good on your end!”

It’s friendly, sweet, and just the right amount of push. It doesn’t feel like pressure or neediness—just the way an Aquarius man likes it. You could also simply reply to his messages by saying “yeah, that sounds cool,” or “sorry, can’t do today—how about tomorrow?” Cool as a cucumber!

Let your messages to the Aquarius man be friendly and upbeat. He might not be the type for heart emojis and “I’ll love you forever” kinds of messages. In fact, the typical Aquarius man might get pretty uncomfortable with mushy messages.

So, when you do text him, be his friend—imagine yourself as his very best friend. Try something like:

“Hey, you free tomorrow? I have two tickets to the ___ concert, and my friend can’t make it!”

First of all, Aquarius men are social and love to have fun. Second, you’re saying that you were going to go with a friend, which implies independence. And third, you’re friendly in tone, which will make him more eager for you.

If you’re further along in your relationship and the “buddy-buddy” style doesn’t fit your dynamic, try to kick up the flirtiness.

Aquarius men are flirts themselves, and they aren’t immune to charm! They absolutely adore flirty messages—the more playful the better!

Air signs are all about words and messages, about communication and language. So, brush your flirting skills up!

Don’t address heavy issues via text—leave those for a face-to-face conversation or an email. You could text him something along the lines of:

“Hey, you. Was thinking about you last night….”

This is subtle, yet sexy. It’s not too overbearing and leaves him plenty of room to get creative. Try it!

The typical Aquarius man doesn’t want an ordinary relationship—or an ordinary woman. He wants something and someone different, unique, and special.

Send him messages that reflect his own uniqueness, and well as yours, and remind him that you have something unusual together.

For this one, I’d advise a meme, picture, or article on a topic you’ve chatted about together. Not something fluffy or emotional but something deep or “out there.” This should do the trick:

“Hey, babe. Remember we chatted about this the other day? Such a crazy idea!”

It’s even better when you make the subject a cause, conspiracy theory, or something that supports human rights!

Aquarian men are smarter than most, as you probably already know! Smarts often translate to a wicked sense of humor, so making this man laugh with something clever will have him wanting you all over again!

For this, I’d suggest sending him a clever cartoon or satire article that you know he will love. Make it one that’s not too “basic,” though, and perhaps with a bit of scientific relevance. You’ll have him eating out of the palm of your hand!

Read next: Decode 5 Types of Texts from Your Aquarius Man—Without Overthinking It!

Reach out and ask your Aquarius man if he’d like to do something out of the ordinary, preferably scientific, spacey, activism-related, social, or just plain fun.

This will not only strike his interest, but it’s a super-easy lead into a date! Try:

“Hey! Have you checked out the local planetarium (or whatever) here yet? I’m dying to go!”

I hope that these examples help you to get your Aquarius man to chase you again!

Just remember that manipulating yourself and your behavior to get a man to love you cannot work for long. When you reach out, make it from a genuine place. Be true to yourself!

Once you’ve been with him for long enough, you’ll see his soft side come out, and you’ll learn how much emotional sensitivity he is capable of. He just needs that space from you not to feel pushed or pressured in any way.

Have you been with an Aquarius man who plays hot and cold? Tell me about it! Share your story with me in the comments—I’d love to know more!

Want to know if you’re compatible with your Aquarius man? Try my fun, free quiz here!