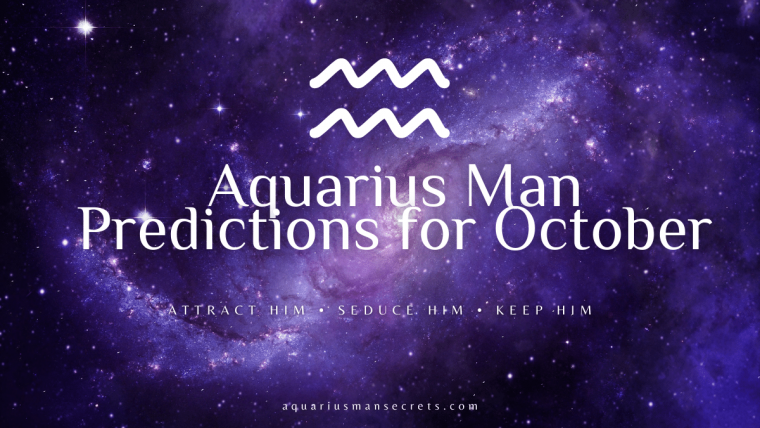 Hello my lovely readers, how are you? I hope all is relatively in order and in its rightful place, despite all the Retrogrades! I’ve come bearing tides of the Spooktober for the Aquarius man, so join me in this creepy crusade of the starry skies.

The first week of the month applies a hard square between both of the Aquarius man’s rulers, and they are both Retrograde, so the Aquarius man won’t be “up to the task.” At least, that’s how he’ll feel about himself. This is a good time to cheer him up with some meaningful topics and deep conversations about your intimacy.

The second week of October poses a necessary evil for the Aquarius man, especially the Full Moon in Aries, after that he’ll breathe easier. This is a great time to send virtual and astral support his way; even if he doesn’t know it in his conscious mind, he’ll feel it in his heart of hearts. He might even dream of you and call you in the morning to tell you all about the dream.

The third week poses a great chance to get to know your Aquarius guy and his daily routines. It’s also an excellent opportunity for him to get to know you. Be yourself, go wild, and have fun while you’re at it – that’s going to snare his attention for months to come…

The fourth week holds a potent event for the Aquarius man – a New Moon Eclipse in Scorpio, his tenth house of career and publicity. This is a perfect time to listen to his musings and to inspire him in ways you might have never imagined. Be free, be yourself and give honest opinions about topics he’s interested in; it might bring you closer together than ever.

The start of the month puts focus on his own image and deeds. The Aquarius man is restless and has obsessive thoughts about his Karma and his general direction in life, thanks to the Moon activating that pesky Retrograde Saturn in his first house.

What’s more, Retrograde Saturn makes a hard square to Retrograde Uranus in the fourth house. This means that the Aquarius man is feeling overwhelmed by the themes from the past, especially his childhood, and he feels lost – a feeling he gladly welcomes any other day, but during this Retrograde transit, he doesn’t feel like he’s owning up to it.

This might put him in a foul mood, and he might not be up for casual flirting or “meaningless” texts and messages. But Mars is conjunct Fortune in his fifth house, so he will be down for deep and very meaningful topics that you might have to share with him.

This is a good time for proper and deep communication, for attention to detail (aka small hints and keywords in your conversations with him), and for verbal exploration of your inner sexual domains.

The Aquarius man might seem aloof and asexual most of the time, but trust me, he is working his way up to start a conversation about what turns you on and what doesn’t; he will revel in the fact that he knows this about you.

The second week marks a sort of culmination in the Aquarius man’s daily life. There’s a Full Moon in Aries on the 9th, and he is going to feel it in his mind and words the most.

He is going to feel a shift in his inner philosophy, and he is going to be pressed to translate the inner shift into the outer world. His words and tone might be, unnaturally for him, high and sharp at this time. But it’s nothing to fret about, his frustrations and fears gathered from the previous transit must get out somewhere…

The biggest struggle he’ll have is with himself and his own outdated beliefs. After this Full Moon, he’ll handle his affairs with his family and trauma from childhood. After that, he’ll be able to speak frankly and sincerely with you.

This second week will pose a sort of culmination for the Aquarius man’s inner world, and he will be forced to let go of the outdated wounds and programs that don’t serve him anymore; it’s a great week if you think about it from the cosmic point of view.

This might not be the best week to get into intimate topics with him, but it’s a great week to send light and love from afar and to lend your support via telepathic and virtual messages.

Getting To Know The Dark Side Of The Moon

The third week of October is a great time for all things romance! Now you can let loose and ask him out on all kinds of dates. He’ll even welcome the questions you’ve gathered while you were apart.

This is a great week for mountain-climbing and binge-watching on Netflix. The Aquarius man is in dire need of (intellectual) stimulation, and he’ll appreciate all kinds of nature adventures, as well as sci-fi/cybernetic adventures.

Prepare a list of questions and topics to cover that you want to hear his honest opinion about. Share your findings and research with him, listen to his commentary, and spare no expense when it comes to making the two of you cozy and feeling good while you go at it.

This is also a great week to observe and listen to his daily routines (if he has any) and to see how he functions on a daily basis. This week offers a great chance to observe this peculiar animal in its natural habitat, and you might even become a recurring pattern in it.

Watch for the small signs that he’s integrating you into his daily life, and be yourself. There’s no better aphrodisiac to win the Aquarius man’s heart than to be yourself and show your true nature. He’ll appreciate it greatly.

Read also: Where To Go on a Date with an Aquarius man

The fourth and final week of Spooktober casts a shining light on his public life and career. The Aquarius man is not one for public life, but his image within the company and his position might receive well-deserved recognition and fame.

This is a great transit to ask all sorts of questions about his job and to listen to his stories from work. If you are not sure what he does for a living – now is a perfect time to let him get lost in his own thoughts while he explains it.

In turn, you might find out about dimensions and layers of existence you’ve never dreamed of existing. This is a very good time to plant the seeds of new ideas, no matter how hypothetical and far-fetched they might seem to you.

The Aquarius man’s mind operates on an entirely different frequency and plane from that of regular people; conversations about topics that seem strange to you, might pose a refreshing point of view for him that leads him to new discoveries and groundbreaking leading points.

You might prove to be his muse, so go on to inspire him deeply.

And there you have it, my dears. This month is going to be quite challenging for the Aquarius man. His mood will gradually turn for the better as the month advances, worry not, but be patient at the beginning of the month.

The third and fourth weeks look amazingly good if you’re seeking romance and lovey-dovey encounters with the Aquarius man. His mood will improve greatly by the end of the fourth week, and he might seem like a different man compared to his old self from the beginning of the month.

This month offers a great opportunity to deepen your relationship and to pull on his heartstrings, so be yourself and tread softly during the first two weeks of October.

I recently wrote an article about an Aquarius man’s texting style. You might want to give it a look before November approaches, it’ll help you ease through the challenging periods or misunderstandings. Trust me on this one.

One thought on “Aquarius Man Predictions For October 2022”