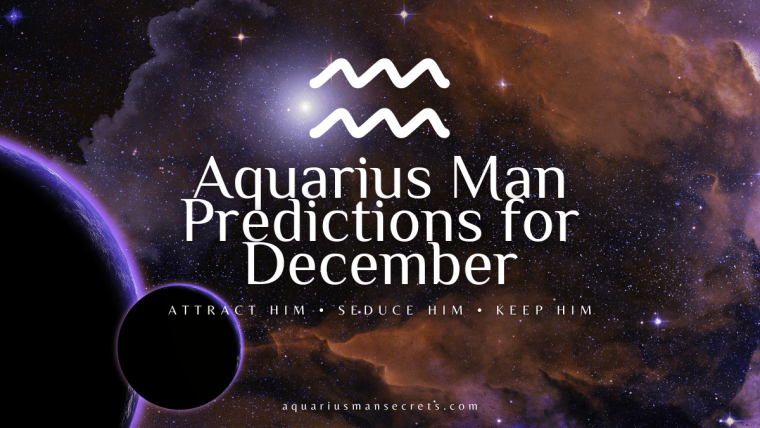 Hello, my darling readers, how are you? Has your spirit already transcended into 2023 and it’s only your carbon sleeve that is still residing in this cursed 2022? If that’s so, then take my hand and join me in this Horoscope that I’ve prepared for your Aquarius man.

The first week of December will cast focus on the Aquarius man’s social and financial life spheres. His friends will demand more “face time” from him and will tease him for having a social life outside of their (sacred) circle of nerds. His finances will try to take one for the team, but he might not agree with that verdict – so, he might be busy trying to win a match against the higher power, as one usually does…

On the 8th there’s a Full Moon in Gemini, in the Aquarius man’s fifth house, and this means that the time for his lover or partner to shine has come! This is a great time for cozy dates under warm blankets, sitting in front of the fireplace, and drinking some hot apple cider or wine.

The third week is like a prep week for the Aquarius man’s subconsciousness. Venus and Mercury have migrated to his twelfth house of dreams and deeper levels of the psyche, so he is in tune with the celestial currents much more than before, and thus he is open to changing himself and evolving into a better version of himself. Use that carefully.

The final week of December brings forth a mighty transit in the form of a Super New Moon in his twelfth house of hidden chambers of the mind and the soul. This is a perfect time to plant romantic seeds and ideas in his head and to cheer him on as he tackles his inner obstacles and demons on the road to bettering himself!

Bad To The Bone

During the first week of the month, the Aquarius man’s field of finances and social life is going to be active. This means that he is going to be asked to revise some administrative B.S. that he’s not having, and his friends will give him crap for not spending enough time with them.

His mood will be level, as always, and he will take the kick out of his friends roasting him for having a social life other than with them. Luckily, he’ll be intuitively prepared for that mad financial conundrum, and he’ll be able to solve it in his favor.

This first week poses a good chance to go out on dates that include his friends and represent more of a shared activity than a romance for two. For all of you who have eleventh-house stelliums or strong placement, this will be easy-peasy for you.

But for all of you ladies who have strong Leo-Scorpio and first and seventh house placements, brace yourselves for the “intrusion” of his friends. Just hang in there, respect his social life and his friends, and all should end well for you and your delicate sensibilities.

The Full Moon Can’t Hurt Me

The second week kicks off with a mighty Full Moon in Gemini, conjunct Mars Retrograde, and this makes for a fine trine with Saturn from his first house; this means that it’s high time for his girlfriend to shine some of her own light into his life.

His friends and social life will be weakened from getting their way from the week before, and thus his lady love will have gained an advantage, and she will come to cash it in by requesting his full attention and presence during this Full Moon.

So, the Aquarius man’s focus during the second week of December goes out to his lover or partner, and he is beginning to dream more vivid and dynamic dreams due to Mercury’s transition to his twelfth house. This also means that he will be more likely to withdraw from the “public eye” into his own techy dwelling.

This week offers a good chance for dates that take place at his abode, dates that are comfortable and cozy, and spending time together under the warm covers with a strong cup of rum and coke or hot chocolate. Go and live the dream life of your Taurus placements, I’m sure most of you have them strong in your chart!

The third week puts focus on his lover and his intimacy field. This is a good week to have your wishes fulfilled and your sensual needs pleased. His focus will be, mostly, on you and his dreams and the hidden life of his inner monologue.

The Aquarius man’s psyche will become more vivid and full of imagination during this time, as both Mercury and Venus have moved to his twelfth house. But, since they’re still degrees away from Pluto, his dreams and subconscious thoughts will be most pleasant and humorous.

This is a good time to plant your own ideas and visions into his subconsciousness, so make sure to play ASMR that you like before going to sleep, whisper in his ear, and paint the pictures with your seductive words that you wish to speak into becoming reality.

The Aquarius man’s heart is open to all kinds of positive and lovely influences right now, so your job is to just make sure that you’re coming out of a place of love and wanting what’s best for him, and your mutual wishes will be granted in the most common, yet still spectacular way imaginable.

And We Have A Winner!

The fourth week finally comes, and with its coming comes a Super New Moon in Capricorn as well. This is a very potent and mighty time for the Aquarius man, for his psyche is greatly influenced and he is urged to upgrade his software to the best of his abilities at this time!

This is a great opportunity for him to start going to therapy, see a Tarot reader, have his Chakras balanced and cleansed, and do something meaningful for himself that has been on his mind for ages, but he hasn’t done it because of his skepticism and tendency to put things off.

Now is also a perfect time to speak to him about all the things you wanted to do in the last couple of weeks or days. Being honest, direct and without filters is a great thing to do at this point in time. His ears and his mind will be open to all kinds of (harsh) truths that he’s been unable to digest thus far.

It’s a very potent time that can result in long-lasting, positive effects, and it should be utilized. He might be in a sour or fluctuating mood during this week, but all in all, he will have a positive and enthusiastic mindset, and you shouldn’t be afraid to run by him with all of your ideas or needs in the romantic sense.

There you have it, my darlings. Hopefully, this guide will give you the necessary data for your computations that will aid you on the path to becoming more irreplaceable in your Aquarius man’s heart.

His mood will be moderate during this month, except towards the end, when he might become more edgy or snappy, but all is fair in soul growth and character evolution, as I like to say. It’s not a pristine nor easy business, bettering oneself and tackling one’s inner demons.

I sometimes hear from readers that while these Horoscopes are helpful for their romantic lives, they crave more detail and more specificity for them. This is totally understandable, and I have figured out a way to make sure you get all the information that you need to take advantage of transits and to know what pitfalls to avoid.

I’ve created a spot here where you and I can talk personally about your own concerns and how to best create the relationship that you have been waiting for. I love talking to my readers and getting to know them as people – and truly, what have you got to lose? Connect with me here.

Wishing you love and light on your journey.