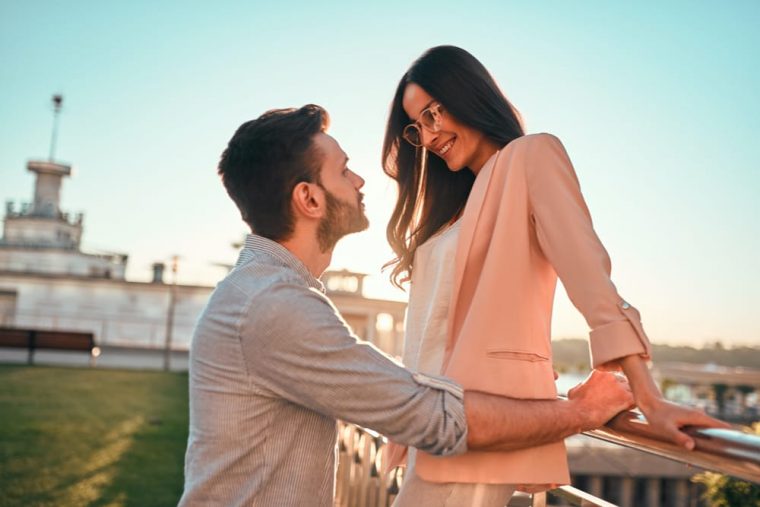 What does the Aquarius man want in a relationship? Are you in love with one or really like him but aren’t sure what he’s looking for? Astrology can help!

Aquarius men sometimes seem like an enigma, but these five things make every Aquarius swoon. Keep reading to learn how to snag him!

This doesn’t mean he wants to be a bachelor forever. It simply means that the Aquarius man needs personal space in which to feel himself. He craves solitude and time to do things he likes without his partner.

When you get together with an Aquarius man, you need to keep this in mind because if you ever get too clingy or try to tell him what he can or cannot do, he will likely end the relationship.

He is looking for an independent partner that will not need him to be with her every moment. It’s healthy to spend time apart enjoying other friendships or even being alone.

This freedom will make him feel secure, and he will appreciate a partner who lets him do this often. When I say often, I don’t mean all the time, but he will want it quite a bit.

Compromise may need to be had between you and your Aquarius partner if you like spending most of your time with him. He has to have this for him to feel part of a loving and happy relationship.

Take care of yourself and let him take care of himself. This will make him feel so positively wonderful. This is the only relationship that will be fated to make it. He won’t have it any other way.

Remember that if you find you miss him terribly when he’s not with you, that’s actually a good thing! When he is back to you, you can spend quality time together rather than just quantity.

Aquarius men love women who are unique and individual. He will tend to gravitate more toward a woman who has her own sense of style and doesn’t dress like everyone else.

He will also want a woman who has a unique personality and sense of self. Being yourself, even if you’re zany or quirky, is very important. He will absolutely love this!

Always be yourself when you’re with him. He doesn’t like women who are like clones in the social world. He seeks out women who have their own flare and distinctive personalities.

If you like living in an oddly shaped house, listen to really unusual music, or eat different cuisine than anyone would expect, the Aquarius man will be very interested in getting to know you better.

Perhaps you have rituals that make you look odd when you’re out in public. So what?! An Aquarius man doesn’t mind this at all. As long as you accept his oddball behavior, then it’s all gravy!

The more different you are from most women, the more he will appreciate you and love you. In fact, you’re the type he will want to marry when he does finally want to settle down.

It may take him a while, but honestly, if you’re what he’s looking for, he will show you that it’s worth it to take your time with him. He’ll show you a world you’ve never known.

Yes, I know how weird that sounds. Many men want lots of attention and affection. Well, in the beginning, an Aquarius man won’t appreciate it. This may fall into the categories of freedom and being different.

The Aquarius man doesn’t want a woman pining for him all the time. It makes him uncomfortable, and it makes him feel as though she’s too needy. He wants an independent woman that doesn’t need him but wants him.

As such, he’d prefer you spend time on your own, do your thing, and not worry about him so much. Don’t text him all the time—keep it sparse in the beginning at least.

The trick is texting him every now and then with simple things. Ask him how he’s doing or how his dog is doing. Don’t make serious conversation when you text him.

If you make him part of your world instead of all of it, you’ll find far more success. Don’t tell him you miss him. That makes him feel you’re clingy. It’s all right when he’s on a trip to say it once or twice, but if you do it a lot, he’ll be turned off.

This guy is definitely unusual compared to most other men. He doesn’t want you making a fuss over him. He wants you to make your own life your priority as he does with his.

This way when you’re together, you enjoy each other. He’s not the sappiest of guys, either, so be careful coming on too strong too quickly. He’ll go cold and run. Show him that you dig him, but he’s not your world.

The classic Aquarius guy doesn’t want you to reveal all you are to him up front. This will send him running in the other direction. When you tell someone everything about you that fast, it’s too much.

This guy wants small tidbits as you get to know each other. Save all the details to reveal at a later time. If there is something serious going on in your life, you may want to hold off on that, too.

Unless it’s an emergency, you shouldn’t show him all your cards. This is a game you two are essentially playing that leads to a more involved relationship with time.

That being said, you want to just show him one or two of your cards in the early stages—that will be enough to lure him to you. The less you give him the better, but don’t be so cold he can’t read you at all.

If you are too stoic, he’ll wonder if you even like him. Don’t do that. Just let him solve the puzzle of you over time.

This is far more exciting to him than you realize. Most women will throw themselves at him immediately because he’s easy to talk to and has good advice. Sadly, they get turned down because they’re not interesting enough.

A mysterious woman is intriguing. He wants to work for it!

I don’t know how surprising this may actually be to you, but the Aquarius man won’t be with a woman who doesn’t speak up. He won’t tell you what is on his mind unless you ask—so ask!

Be prepared to get the full truth. Most Aquarius men live by being totally honest and brutally truthful. As such, they want a woman to tell them the truth at all times—and demand it from them in return.

The Aquarius man operates best through deep communication, so it’s really important you learn how to do it so that you aren’t left wondering what can be done to save your love with him.

Most people cannot handle the truth or someone being very open with their thoughts or feelings. Aquarius man may react poorly at first, but he will appreciate the candor because it’s better than someone telling him what they think he wants to hear.

He’s a “pick your battles” type of guy. Think about if what you want to say is something you’d be willing to really fight for, or is it something that you can solve yourself?

The Aquarius man is intellectual, and he does best with a woman who sits down and talks to him in a very cerebral way instead of emotionally. He doesn’t do well with drama.

Be calm, be relaxed, and don’t try to rush anything. Don’t overreact, don’t get jealous, and don’t make him your entire life. Be independent and do your own thing.

Your Aquarius guy will stick around if you live up to these simple but crucial desires he has for the perfect woman.

Speaking of perfection, did you know that sexy pop singer Harry Styles is an Aquarius man?

Do you exhibit any of these Aquarius-catching traits? I’d love to hear from you in the comments!

Wishing you all the luck of the universe!

How To Attract An Aquarius Man In March 2021

How To Attract An Aquarius Man In February 2021