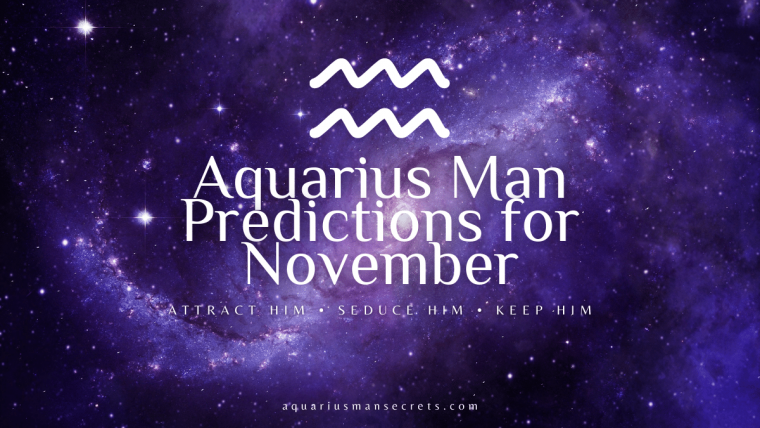 Hello, my darling readers! How are you? Are you ready for the cozy month of November? I hope you are because I’ve got fresh predictions for our favorite oddball of the Zodiac – the Aquarius man. Strap in and let us dive into another adventure!

The first week of the month will be quite intellectually and emotionally charged for the Aquarius man, but he’s giving it his best to ride the tsunami of global change. Aquarius is not just a Fixed, but also a humane and selfless sign, so although his personal life might seem quite unobstructed or calm to the onlooker’s eye, global problems are as much as personal as his own, don’t be fooled…

The Aquarius man might be very confused and irritated during the second week, not just thanks to the Eclipse in Taurus, but also because he lacks the emotional capacity to comprehend what is going on around him, and why there are turmoil and problems when there are no logical explanations for it.

The third week offers valuable insights into the mutual psyche of your relationship, and if you’ve ever wondered about it, now is the right time to get your synastry done. During this week, the two of you can get to know each other better and grow as people who share things in common, things tied by the heartstrings…

The fourth and final week of November brings new beginnings and new friendships in heaps, thanks to the New Moon in Sagittarius. As the fourth week kicks off with a strong spotlight on the Aquarius man’s eleventh house of friends. Make sure to include his friends in some of your couple plans – he’ll love you for it.

The beginning of the month casts a heavy light on the Aquarius man’s personal affairs, sense of self, and looks. The Moon conjuncts Saturn, and this amplifies the tense square with Uranus. Oh boy… the Aquarius man has a lot on his mind, and what’s more, his confidence is taking a major hit.

He wants to be right (he’s used to being right), but he’s doubting himself, and he’s facing resistance wherever he turns. As a Fixed sign, he likes tradition and structure, but as a futuristic visionary and an intellectual rebel, he desires much-needed change – he’s at odds with himself, first and foremost, and then with his family and home surroundings as well.

His career and public life are heavily highlighted at this time, and Retrograde Mars is adding up with its own weight from his fifth house of romance and fun, so, the sense of having his hand forced from all sides is overwhelming.

But who better to ride the waves of chaos and change than him, don’t sell him short, he’ll catch a whiff of that fun this way or that, and thus, this might be an excellent time to go public with your relationship or to go cave-exploring as a converse date idea.

What Is Going On?

The second week blasts off with a mighty Full Moon Taurus Eclipse, taking place in the Aquarius man’s fourth field of home and family, and this can mean quite a big disturbance to his inner peace. Something that has been brewing for a while now, in his home, is reaching a tipping point, and the Aquarius man is forced to make peace between his family and his career.

He will, of course, opt for his career, but his mood might not be all that dandy about it. Now is a good time to cheer him up by doing something unexpected and fun for him, like taking him to an aquarium. Thinking and talking about animals could take his mind off some less cheerful and interesting things.

Right after the Full Moon, the days will be good for having fun, spending time with friends, and playing games. You can also plan some fun activities for him, like signing him up for a trivia night or taking him to a planetarium to learn about the stars.

If you’re keen on buying him a gift and cheering him up that way, then a telescope could be a mighty surprise that will cheer his gloomy heart for months to an end. This is a great week to show initiative and pamper him in order to lift his spirits.

The Calm After The Storm…

The third week of the month puts the spotlight on his partner or lover, and now it’s his turn to show his affection and gratitude – something he’s not very good or proficient at. If you have some special desires, wishes, or plans you wish for him to fulfill, then make sure to tell him plainly and clearly.

The Aquarius man will do his best to be of service to you; he wants to make you happy, and he can be very empathetic and emotional, once he understands what’s going on and where you’re coming from. So use this week to educate him on fulfilling your desires, especially if they are massively different from his own.

This is a good week to develop mutual empathy and telepathy; thanks to Mercury in Scorpio in close contact with Venus, the Aquarius man will be able to understand your mind better and comprehend your emotions on a more personal level.

This is a great time to spend as much time outdoors as indoors. Work on finding a compromise and then utilizing it to the best of your wishes. This week’s transits offer an opportunity for the growth of your mutual understanding, and the general growth of your relationship.

The fourth week of November highlights his social life, friendships, and good times spent with his closest friends. This is a great week for meeting his friends, or for him to meet your friends, to expand your friend circle, and to share in some good adventures and stories around the campfire.

The 23rd of November hosts a New Moon in positive Sagittarius, and this could mark a new beginning in his close relationships. We all know that the Aquarius man values friendships above all other (emotional) connections, so this might be an excellent time to take your friendship to the next level.

The Aquarius man likes nothing more than when one of his friends turns into a lover, in a spontaneous and natural way. This New Moon offers an opportunity for just that, so if you’ve got a mind to it – seize it and don’t look back!

This fourth week is excellent for new beginnings, new charitable causes, and volunteer work. The Aquarius man is ready to open up his heart a bit more, and wiggling your way into it might just be through mutual charitable or volunteer work. Be positive and enthusiastic and have fun while spending time together – that’s the recipe for success.

The Aquarius man’s mood might be on the heavy or confused side during the first week of November, but after the Eclipse is over, he will begin to fall back into his normal self.

There’s a lot of internal struggle going on during the first two weeks, so make sure to be reasonable and have a calm and educational approach to him.

Once the third week kicks off, you can expect and demand more on the romantic front from him, just make sure he understands (fully) what you want and what you mean, in order to avoid making him feel useless.

If you are still having doubts about the state of your Aquarius man or feel as though your relationship can use a little bit of a boost, then you might want to book a VIP consultation with me to solve your burning questions.

This way I can dig deep into your unique situation and you can come out on the other side feeling more connected than ever. I’ve reserved some spots for my readers, so if this feels like a call you need, book your consultation with me here.

Until next time, my lovely readers – I wish you all the luck in the Universe on your journey!

One thought on “Aquarius Man Predictions For November 2022”